0
What is the Business Case for Data Visualisation?
12 December 2014
Next 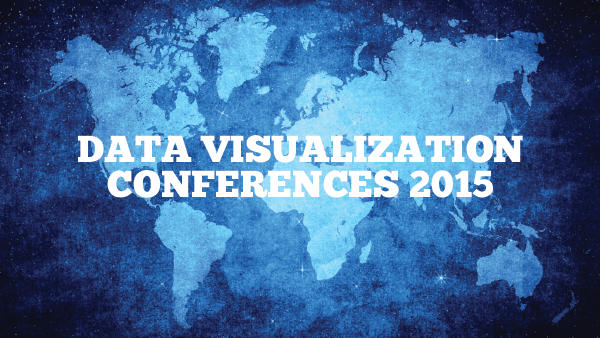 Editor’s Note – We’ve got an updated list with 2016’s the new dates and other great events here: Data Visualization Conferences 2016

With the new year coming up, and new travel budgets being set, it’s time to see what data visualization conferences are really going to be worth your time.

Innovation Enterprises put on a massive list of big data & visualisation conferences around the world and throughout the year. Featuring a wide variety of speakers and a fast paced format, you’re exposed to a lot of great ideas quickly.  A full calendar of Innovation Enterprises events can be found here.

An event including 60+ events and 200+ speakers, developer week encompasses pretty much everything about modern tech you can think of. Among this year’s conference tracks are Data Science and Machine Learning, Web App Dev, Mobile Dev and HTML5. More of a fun environment but with still some great networking and learning potential, this is a good balance to the VDAs below.

Running since 1994, the Conference on Visualization and Data Analysis (VDA) is more of an academic conference, but offers the chance to see some cutting edge ideas. VDA covers a wider range of topics than many other conferences and gives you a chance to delve deep into some of your data problems. This is the real reason you’ll be in San Fran this week, so you can check out Developer Week

Considered to be the Pulitzers of infographics, the Society of News Design have set up these events annually since the late ‘70s. The awards show aside, the summit and the “Show, Don’t Tell” workshop are going to be your best chance to see what the best from around the world are doing in infographics and learn some new techniques.

While most of the details are still being set, this conference is in its 8th year and has been able to set up an environment that encourages better exchange between data researchers and practitioners. Including workshops, keynotes and tutorials, this is a good conference to make connections in East Asia.

A Human-Computer Interaction focused conference, Chi looks to showcase advancements in a myriad of fields around HCI, including visualisation.  This year’s theme is “Crossing” and it looks like you’ll see a lot of elements from the multiple disciplines coming together in many of the featured research papers and applications.

You’ll have to visit the page to see what is happening and who is speaking in the cities near you, because this is an absolutely massive event. There are bound to be several interesting events in the city closest to you, but look into others to see if a trip is worthwhile.

Program will be announced one month before conference.

A Eurographics and IEEE co sponsored event, this conference focuses on the exchange of ideas between researchers and practitioners from around Europe. This event also features co-located events, so if you can’t attend in Italy there may be a piece you can still participate in.

More of a science based conference, ICCS offers a chance to see cutting edge visualisations of some of the most complicated systems being attempted. The theme this year is “Computational Science at the Gates of Nature”, focusing on drawing inspiration from nature as well as better understanding nature through visualization. There are many elements of the conference focusing on the arts and humanitarian fields as well.

Covering art, interaction and information, Eyeo is a newer conference quickly building a solid reputation for itself. Eyeo gives you the opportunity to get hands on in their workshops in several labs, listen to a laundry list of great speakers and mingle with the full spectrum of web and application producers. Their Vimeo has a sample of past talks.

Speakers will be announced here.

A bit more arts and culture focused then some, EVA is an excellent event to share ideas and pick up new approaches from the less business focused side of things. Including a workshop, EVA looks to inspire both the artist and the production developer to bigger and better things.

Some details are already published here.

One of the biggest computer graphics conferences, Siggraph is at the top of most lists for conferences. Everything from technical papers, research, industry applications, a job fair and an animation festival are part of Siggraph. Most of the application deadlines for submissions fall in late spring, so by June/July you’ll see more concrete details on what’s available this year.

Started in 1989, this is the oldest and largest data mining conference worldwide. KDD is able to not just showcase best practices in industry and government, but also highlight innovative research. Because of this it has a long tradition of showcasing talent that would later go on to great accomplishments.

The Online News Associates Annual conference and awards. There aren’t a lot of details about this year’s event yet, but ONA draws in some of the best and brightest in digital journalism. A great chance to see what new technology and approaches are being used for the very specific set of problems that news visualisation can present.

Again, not much about this year’s, but IEEE events are some of the best that you can attend. Really three conferences, Visual Analytics Science and Technology (VAST), Information Visualization (InfoVIS), and Scientific Visualization (SciVis), you are bound to find a great deal of information and inspiration.